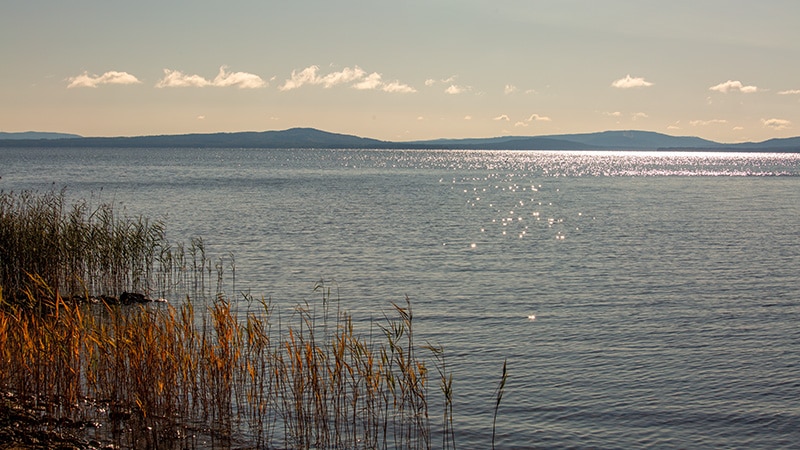 In the heart of Dalarna, Siljan is perhaps more than anything else a symbol of tradition, Midsummer, folk costumes and fiddle music. It was around Siljan that Swedish tourism was first established in Sjurberg and Tällberg just before the turn of the last century. Today, the Siljan region is one of Sweden's most popular tourist destinations.

Siljan, with its characteristic bluish mountains around the lake, was formed by the great meteorite impact 377 million years ago and is the largest known impact site in Europe. In the Palaeolithic and Viking eras, Siljan was an inlet of the Baltic Sea. Today it is Sweden's 7th largest lake.

The name Siljan – Silghis siö – has been interpreted as Old Norse ”Sylghir” meaning “the swallower” – the lake that holds a lot of water.

This is where the water from the rushing rivers stopped and calmed down before continuing through Dalarna. Today, the water is regulated by power stations (Trängslet) upstream of Österdalälven and Grådadammen at Insjön

Siljan is situated 161 m above sea level and the water level varies by about 2 metres. The level is affected by snowmelt in the mountains.

Österdalälven forms a deep channel through Siljan. The maximum depth is 134 m. The average depth is 28 m.

In the past, Siljan was of great importance as a transport route for ore and timber. Passenger traffic was busy in the 18th century and until the mid-20th century. Now, tourists enjoy boat trips on the M/S Gustav Vasa and S/S Engelbrekt in the summer. Siljan does not have that many islands except for the archipelago between Sollerön, Gesunda and Ryssa.

In the past, the lake was used for professional fishing but today recreational fishing dominates. Mainly salmon trout, whitefish, pike and perch. Rainbow trout are farmed in several places.